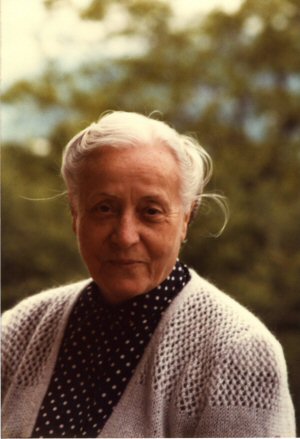 Elvira Myriam Psorulla was born on November 1, 1910, in Haifa. She lives her childhood and adolescent years there where she graduates from High School.
In 1943, she accompanies her sick uncle to Rome for specialized medical care. During that time, she works at the “Banco di Roma,” (Rome bank) and goes to daily Mass at the Patron Saints of Italy Parish in the Eternal City. Msgr. Novarese says  Mass here and he becomes her spiritual guide.
It is immediately apparent that they both share a special vocation for the suffering and this is the beginning of Msgr. Novarese’s dream that will become reality. Sister Elvira works closely with Msgr. Novarese in the founding of his various  Associations emphasizing the diversely able’s active role in the Church and in society by uniting their suffering with that of Christ’s.

A Faithful Servant of the Lord

On May 17, 1947, Sister Elvira joins Msgr. Novarese in founding the Apostolate of the Suffering (CVS) and three years later the Silent Workers of the Cross (SODC). She gives a great impetus to both through her enthusiasm, her total  consecration to the Lord, her commitment to enlarging the Apostolate’s horizons and her living according to the Apostolate’s values. She asks a great deal of herself, but also of others.

An Organizer and a Beacon

Sister Elvira is very organized and fully immerses herself in the Association’s publications, correspondence with members and The Anchor magazine that begins in 1950. She is also very active in the first World Days for the Sick and the  Spiritual Retreats in Oropa and in Re, Italy. She organizes the “Pilgrim’s Home” in 1954, the first Silent Workers of the Cross Community and the Valleluogo’s Mother Home as well. She spends six months in the United States to raise funds  through speaking events to finish the Immaculate Heart of Mary Sanctuary in Re, (Northern Italy).
Msgr. Novarese appreciates Sister Elvira’s innovative ideas about the role of the diversely able and suffering. In fact, she speaks at the international meetings organized by the Marian Priest League.

After Msgr. Novarese’s death in 1984, Sister Elvira, the Elder Sister, has an important role in the evolution of the Apostolate of the Suffering and the Silent Workers of the Cross. She gives invaluable aid to diffusing the Apostolate throughout the world.

In Sister Elvira’s last years, she continues to guide through her example, her open approach always reminding members never to forget the origins of the Apostolate and what it represents.
She died on December 30, 2009, and is buried at the “Salus Infirmorum Sancutary” in Ariano Irpino, Italy.